Annual Report and Accounts 2010 and new Articles of association

Annual Report and Accounts 2010 and new Articles of association 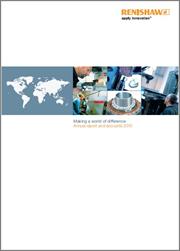 Further to the publication of the Company's preliminary announcement of its annual results for the year ended 30 June 2010 on 28 July 2010 (the "Preliminary Announcement"), it is confirmed that two copies of the following have been submitted to the UK Listing Authority:

1. Annual Report and Accounts for the year ended 30 June 2010 containing Notice of AGM;

These will shortly be available for inspection at the UK Listing Authority's Document Viewing Facility, whose address is set out below.

The Annual Report and Accounts 2010 will also be available on www.renishaw.com (see document below)

In compliance with the Disclosure and Transparency Rules, the following information, together with the Preliminary Announcement (available on www.renishaw.com), forms the information required to be communicated to the media in unedited full text as required by DTR 6.3.5:

In response to the global economic downturn, the Group initiated a significant cost reduction programme at the start of the 2009 calendar year, with a targeted £10m reduction in annual overhead expenditure, a redundancy programme involving 437 personnel and the remaining staff accepting a voluntary 20% reduction in pay from February 2009.

The Board continues to maintain a tight control on costs and additional headcount is approved where vital to support the increasing order book.

Whilst the signs of an improving global economy are encouraging, the upturn may be slower than anticipated, highlighting that Group growth targets may be at risk.

Orders from customers generally involve short lead times with the outstanding order book at any time being around one month's worth of sales value.

The Group invests heavily in research and development in order to develop new products and processes to maintain the long-term growth of the Group. This research and development encompasses new innovative products within our core metrology business, as well as the application of our technology in the area of healthcare, including dental and specific applications in the medical field.

The development of new products and processes involves risk, such as with development time, which may take longer than originally forecast and hence involve more cost. Also, being at the leading edge of new technology, there are uncertainties whether new developments will perform as planned and in some cases, projects may need to be halted.

Research and development also involves beta testing at our major customers to ensure that new products will meet the needs of the market at the right price.

Expenditure is only capitalised once the commercial and technical feasibility of a product is proven.

These risks are minimised by operating strictly managed research and development programmes with regular reviews against milestones achieved and against forecast business plans.

With the closure of the UK and Irish defined benefit schemes to new employees and future accruals for existing members, the major risk surrounding accounting for pension costs and future funding arise from investment performance within the portfolio and actuarial assumptions.

This year has seen the Consolidated statement of comprehensive income and expense bear an actuarial loss of £14.9m (2009 loss of £13.0m).

The UK defined benefit scheme is secured by a registered charge on certain of the Group's UK properties. The Pension Regulator has confirmed that it does not propose to issue any scheme funding directions under Part 3 of the Pensions Act 2004.

With the concentration of manufacturing in the UK, Ireland and India, there is an exposure to fluctuating currencies on export sales, largely in respect of the US Dollar, Euro and Japanese Yen. The Group managed the risk in respect of the year just ended by using forward contracts to hedge forecast income streams for its Euro and Japanese Yen exposures and for a proportion of its US Dollar income streams.

The Group continues to be hedged against current levels of Euro and Japanese Yen receivables on a rolling three-and-a-half year basis, and against a proportion of forecast US Dollar receivables on a rolling fourteen-month basis. The Group monitors the effectiveness of its hedging policies regularly and any ineffective proportions may need to be accounted for in the Consolidated income statement. The policy relating to the Group's hedging practices is noted within the treasury policies on page 14.

Significant judgement is required in determining the effective tax rate and in evaluating certain tax positions. Tax provisions are adjusted as a result of changing facts and circumstances, such as case law, progress of tax audits or when an event occurs requiring a change in tax provisions. Management regularly assesses the appropriateness of tax provisions.

We confirm that to the best of our knowledge:

(a) the financial statements, prepared in accordance with the accounting standards referred to in the Statement of directors' responsibilities, give a true and fair view of the assets, liabilities, financial position and profit or loss of the Company and the undertakings included in the consolidation taken as a whole; and

(b) the Financial review includes a fair review of the development and performance of the business and the position of the Company and the undertakings included in the consolidation taken as a whole, together with a description of the principal risks and uncertainties that they face.