Will quantum dots make for a brighter future?

First discovered in 1980, colloidal semiconductor nanocrystals or quantum dots (QDs) are typically between 2 - 10 nanometres (nm) in diameter and are now being commercialised with possible applications in a variety of thin film devices including solar cells, photodetectors and LEDs. QDs have profound implications for the flat panel display (FPD) industry, but is it really a case of all change from here on in?

One of the many advantages of QDs is their colour tunability resulting from a quantum mechanical effect known as ‘confinement'. Quantum dots are also both photo- and electro-luminescent as a result of their material composition, which may include Cadmium Selenide (CdSe) and Zinc Sulphide (ZnS).

In FPD applications, QDs promise to improve efficiency and power consumption, enhance brightness and colour saturation, increase display life and reduce the costs of current FPD technologies including organic light emitting diodes (OLEDs). Despite first appearing a decade ago, OLEDs have yet to make significant headway in the lucrative TV market due to high costs resulting from low production yields and technical difficulties.

It is widely believed that the advent of QD devices will create a new paradigm which may see the end of liquid crystal display (LCD) domination and the development of new types of low-cost thin film transistor (TFT) products. Touch Display Research, an independent technology market research and consulting firm, forecasts that the quantum dot display and lighting component market will surpass US$ 2 billion by the end of 2016 and reach US$ 10.6 billion by 2025.

The most immediate applications for QDs are in LCD backlighting applications (LED TVs). QDs have been incorporated into a filter film designed to be interleaved between the LED backlight unit and LCD panel. Current LCD backlights use white LEDs, which are blue LEDs coated with a phosphor layer - making them rather inefficient. The quantum dot filter allows the use of pure blue LEDs in the backlight as it converts some of the incident blue light, by absorption and re-emission, into very pure green and red. As a result, the LCD panel receives a richer white light which expands the range of colour (colour gamut) that the display can reproduce. A key advantage of this QD technology is that no significant changes to existing FPD production processes are required, which will help early adoption.

QD LED or quantum dot light emitting diode (QLED) will be the next generation of display technology after OLED displays. The structure of a QLED is very similar to an OLED device in that both use a TFT matrix to actively address each pixel. However, the use of patterned QDs for the emission layer in place of standard emissive polymers has significant advantages. These include pure colour and the prospect of full reproduction of colour-space standards, such as the Adobe RGB, and delivery of a 30 – 40% luminance efficiency advantage over state-of-the-art OLEDs. QDs are also likely to facilitate the advent of transparent and ultra-thin displays with flexible form factors not possible with existing technology. 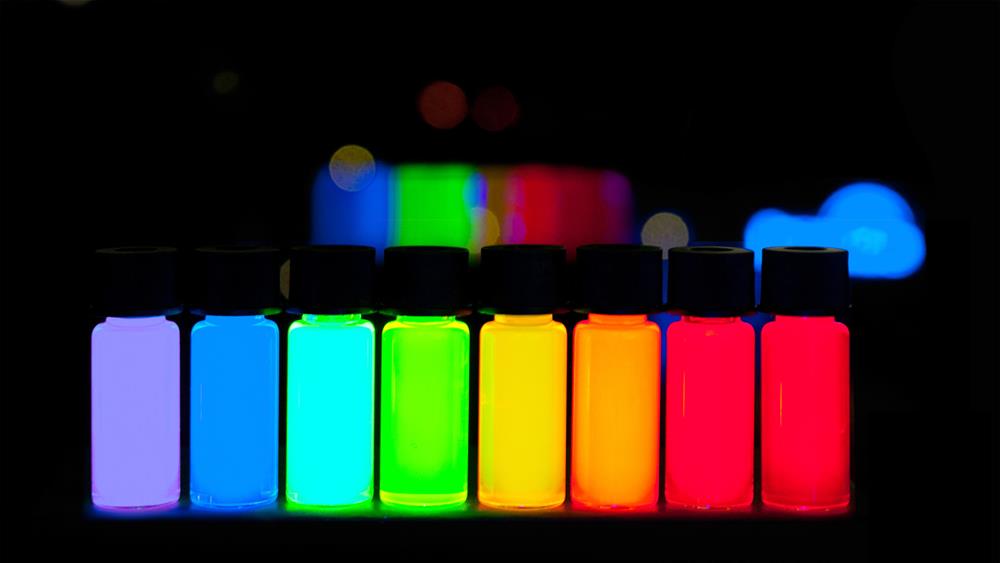 Packaged QD LEDs will need QDs to be arranged in multilayer stacks of varying thicknesses, and perhaps other complex geometries, in order to provide strategies for continuous tuning of the effective, overall emission spectrum. E-jet printing is a very high resolution form of ink-jet printing that is expected to have applications in the manufacture of large-area circuits, photovoltaic modules and other smaller-scale photonic devices. The e-jet printer works by pulling ink droplets out of a print head nozzle using an electric field rather than pushing them with back-pressure, allowing for smaller nanometre-sized droplets. Current experimental machines feature a substrate positioning stage with up to five degrees of freedom, a linear z-axis stage and a rotary stage for controlling the alignment of the printing nozzles for precise drop placement with sub-micron accuracy. Motion control systems may also use an optical or magnetic encoder for coarse positioning and vision-based registration for visual servo control in the nanoscale regime (<500 nm).

Contact printing, however, is likely to be the method of choice for QLED displays, due to its inherent higher speed and lower costs. This pick and place technique, involving a form of transfer printing with elastomeric stamps, potentially allows the alignment of red-green-blue pixels for displays with high-resolutions to 2460 pixels per inch (PPI).There are three basic transfer printing ‘modes' and a technique, called ‘deterministic' assembly, that allows the direct transfer of QD structures from a donor substrate to a receiver substrate appears most applicable. It is expected that current small-scale QD contact printing processes will be readily expanded over large areas by repetitive aligned transfer printing, which is a critical technology for mass production. QD retrieval and printing processes are dependent on the normal force applied to the stamp and stamp velocity. Micron scale registration and positioning accuracy of the stamp contact with the substrate and a repeatable overlay accuracy of <500 nm are characteristic staging requirements. The motion control demands, in this case, look promising for future sales of precision optical incremental encoder systems given the likely future wide applicability of contact printing processes in micro- and nano-device fabrication. Current high-throughput automated transfer printing systems are nominally composed of x-, y- and z-axis linear stages with additional pan and tilt staging to enable controlled and reproducible manipulation of the stamp element.

Integrated optics and precision load cells provide force feedback and position sensing to determine the proper contact between a stamp and substrate for a desired result. As the printing of QD nanostructures scales-up and becomes widespread there will be a requirement for high performance optical encoders on the linear and rotary axes of these systems.

Motion errors of less than 10 microns and less than 10 arc-seconds are typical of large-format air bearing stages used for current FPD processes. Clearly, some improvement in performance will be required to meet the expected motion control demands of future QD device / nanotech manufacturing. Incremental optical encoders, such as Renishaw's compact TONiC™ series, are the best solution for servo feedback in cases requiring the highest precision.

In order to ensure very precise placement and smooth velocity control, high servo stiffness (via high controller gains and large bandwidths) is required to minimise position settling time, a condition known as critical damping. Velocity errors in the steady state are caused by errors in the encoder output, which are amplified by the control gain and applied to the drive as real current causing inductive heating and servo control issues. Ultimately, there is a relationship between control performance and encoder accuracy, such that high gains necessitate high resolutions and accuracy to eliminate the speed (torque) ripple effect.

Renishaw is one of the world's leading engineering and scientific technology companies, with expertise in precision measurement and healthcare. The company supplies products and services used in applications as diverse as jet engine and wind turbine manufacture, through to dentistry and brain surgery. It is also a world leader in the field of additive manufacturing (also referred to as 3D printing), where it is the only UK business that designs and makes industrial machines which ‘print' parts from metal powder.

The Renishaw Group currently has more than 70 offices in 33 countries, with over 4,000 employees, of which 2,700 people are employed within the UK. The majority of the company's R&D and manufacturing is carried out in the UK and for the year ended June 2015 Renishaw achieved sales of £494.7 million of which 95% was due to exports. The company's largest markets are China, USA, South Korea, Germany and Japan. For more information visit www.renishaw.com.